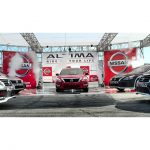 Recently, Nissan hired CryOFX® to design, build and install a custom CO2 Special Effect Smoke Jet System. The system will be for the #RideOfYourLIfe commercial recently shot in May. Unsuspecting visitors were given a chance to test their luck; and have the ride of their lives in the new Nissan Altima.  In the video, you can see a crowd gathering to press a button. However, this is to test if they had won the ride of their life.  Customers that got selected won a ride to race other drivers.

Nissan Ride of Your Life

Furthermore, Nissan Customers that were selected at random got a chance to race other professional drivers at the motor speedway with the new Nissan 2015 Altima. Nissan customers got to enjoy testing the full power of the new Nissan Altima while testing their car racing skills. Also, as the customers made their way into the motor speedway, our CryoFX® CO2 Special Effect Jets shoot multiple smoke effects as the car makes its way into the speedway.  At the end of the race, customers were also greeted with our cold smoke jet effects.

However, no one expected a day at the mall to end at the motor speedway. We invited shoppers to take the ride of their lives in the 2015 Nissan Altima. Watch the adventure unfold. #RideOfYourLife.

CryoFX® is the leader of CO2 Special Effect Smoke Jet System, Products and Equipment. CryoFX® is always keeping it cold, keeping it bold.  At CryoFX® our passion is to help DJ's, Nightclub owners, Party Event Organizers, movie producers, visual effects coordinators, video producers, concert managers and people like to have a blast at your next party or event with Frozen liquid CO2 to entertain and wow your crowd.