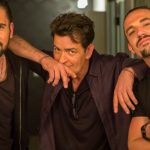 Dimitri Vegas & Like Mike are 2 superstar names in the EDM circuit today. The 2 Belgians have a penchant for flamboyance to say the least. Sticking to their true nature DV&LM have upped their latest shenanigans by virtue of their latest video for their smash hit ‘The Hum’. The Video Production Company that produced the video added smoke special effects from CryoFX® to enhance and cool the party.

The video starts with the Belgians and fellow dance music hero Ummet Ozcan inviting party people over to their house for one wicked party filled with booze, women and wild animals (Elephant, Crocodile & Monkey). Add legendary action hero Jean Claude Van Damme and you’ve got a winner ~ speaking of which we nearly forgot the ‘winning’ ingredient that completely makes this video: Charlie Sheen and the CryoFX® CO2 Cannon Smoke Jet special effects that shoot out at the pool party while the crowd goes wild!

The director went supernova for the official music video for the track “The Hum”  with Ummet Ozcan.   Sampling the famous hum song from the movie The Wolf Of Wall Street; the trio create another indistinguishable big room house track; that easily blends in with the other dozen big room tracks they’ll be playing in their sets.

The video, on the other hand, is a righteous example of debauchery featuring a dwarf on an elephant, sleezy female police officers, alligators, Jean Claude van Damme, the CO2 CryoFX® Jets and … Charlie Sheen.   Sheen’s entrance is indeed epic as he enters the party, cutting the music and asking,  “Who f*ckin died?” to note that no one remained dancing. The party starts up again and the degeneracy continues.

Additionally, we used CryoFX® Co2 Cannon Smoke Effects Jets throughout the video. Also, we were shooting as the pool party and music play in the background. You can see the crowd get cooled and awed at the pool party for the video production of "The Hum". Liquid CO2 Special Effects when used as smoke special effects entertain the crowd by quickly shooting a plume of smoke; that chills the crowd instantly and creates the smoke effects. What's more, this enhances the light and effects of any party, including the pool party of "The HUM"

CryoFX® is the leader of Custom CO2 Special Effect Cannon Jet Systems. Also, For the Video Production of "The HUM", we used a custom Co2 LED Cannon Jets System to shoot the smoke cannons.