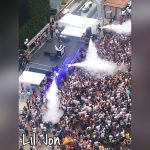 Baseball fans who enjoy watching live games between the San Diego Padres and other opponents; may also appreciate the all-star lineup of entertainers for certain home games. At Petco Park in San Diego, California; baseball fans will get to see magnificent performances from some of the most iconic entertainers on the planet. The annual FanFest events at Petco Park provide a series of fan appreciation days for supporters of the San Diego Padres.  On July 1, 2015, the legendary superstar, Lil Jon, entertained more than 30,000 Padres fans.

As a part of the San Diego Padres FanFest 2015 celebration; Lil Jon was selected for pre-game and postgame appearances. To commence the ballgame between the San Diego Padres and the Seattle Mariners, Lil Jon threw the opening pitch. While, Lil Jon looked very calm on the mound, it was the second time that he was preparing to throw the opening pitch for a Major League Baseball game. On May 24, 2013, Lil Jon threw the opening pitch at Dodger Stadium; which features a match up between the Los Angeles Dodgers and the St. Louis Cardinals.

At the end of the Padres game, Lil Jon ignited a stadium that was packed with thousands of baseball fans using his flamboyant style and remarkable stage presence. Tasked with the postgame DJ set, Lil Jon electrified the crowd with his upbeat lyrics and legendary shouts. As the King of Crunk music, Lil Jon’s performance was uplifting for many fans who witnessed an unfortunate loss for the Padres at Petco Park.

During the postgame performance at Petco Park on July 1, 2015, Lil Jon used C02 Smoke to entertain and cool the crowd. While the blasts from C02 Cryo Smoke Special Effects are powerful and very quick, DJs and entertainers typically receive enthusiastic reviews from their fans. For large stadiums or clubs, an event promoter could procure a C02 Custom Stage Jet Cannon System to amplify the excitement level. However, the proper equipment is recommended for a high-level performance.

For Lil Jon’s performance at Petco Park, CryoFX® created a Custom Designed C02 Smoke Special Effect System. While jumping and screaming to Lil Jon’s performance, fans were able to view large burst of C02 smoke that filled the stage. As imitation fog was shot into the air and into the crowd, fans appeared to enjoy the coolness from the C02 Jet System.

Preparation for the Lil Jon’s performance at Petco Park required CryoFX® to assemble a team. The team consisted of two technicians and two full video crews. Also, the services provided include the complete set up; testing, operations, video shoot, relocation, more testing, additional video shooting and strike (tear down) of the equipment.

Furthermore, nightclub owners, concert tour managers, special effects companies, famous DJs and a variety of entertainers may obtain products from CryoFX®. You can use our products to raise the excitement level at any type of event. For the ultimate party atmosphere, club owners can blast the dance floor and stage areas with Co2 Smoke.

Also, users can purchase or rent C02 Jet Systems; Cryo Guns, Fog Blasters, C02 Bazookas, C02 Cannons and other special effects equipment from CryoFX®. Get the C02 supplies and equipment that you need at CryoFX.com or call (619) 855-2796 to speak with a sales representative.