Sparkular China (where it all started) -> CryoFX®. CALL NOW to Order!

Fireworks were first discovered and manufactured in China. The crafty and complex nature of the fireworks led to increase in demand especially in Celebrations in Asia.

It is not clear who created the first fireworks machine.

Every invention of a new fireworks machine has new styles, colours, shapes and many more, trying to cover the setbacks of the previous.

Currently, there are sparklers for every type of event and production, with improved functionality.

Fast forward to 2016, the introduction of Sparkular china revolutionised the market. Showven Technologies electronic Liuyang is the special effects company that introduced the Sparkular china and took the industry by storm, having the original patent in China. Showven reached out for distribution of the Sparkular China in the USA. It selected a distributor in Florida known as Sparktacular to distribute its sparkular machine.

The Sparkular China, a sparkler fountain machine was debuted in Las Vegas during the LDI show. In October 2016, the Sparkular china won the best debut product award in the special effects category 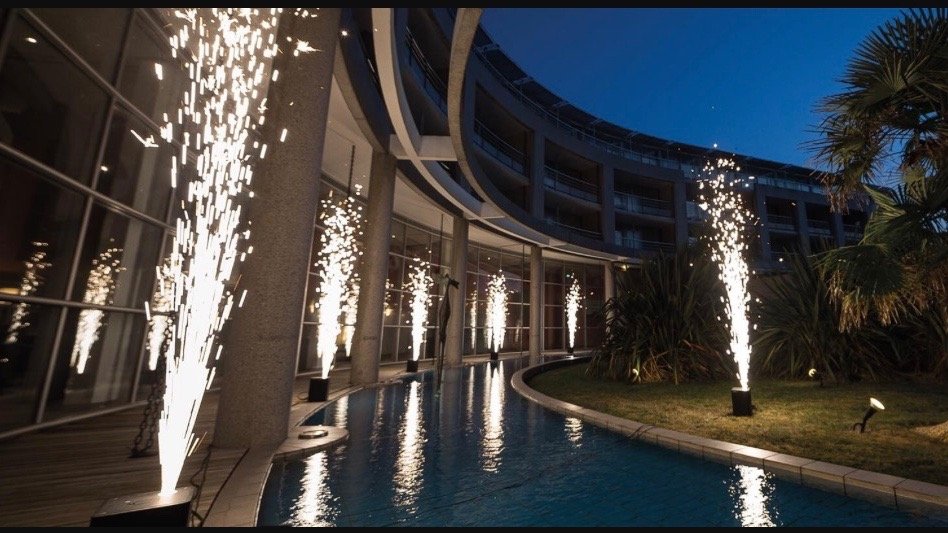 This machine is unique from its predecessors since it is fully automated and programmable, re-usable, has a low smoke output and produces absolutely no foul smell.

The Sparkular China’s operation is a patented technological process that uses cards that work with a pack of granules (each card goes with a pack of granules weighing 200 grams). These granules are heated and then rise up just like shooting stars to create a fountain sparks effect until they burn out. One pack lasts about 10-15 minutes (depending on height and amount used) after which, you will need to replace it with another pack. This is considered a setback hence a need to cover this loophole.

Unlike the traditional fireworks machines that were limited to outdoor events, the Sparkular China is safe for both indoors and outdoors events and productions. This is because; the Sparks produced by this fireworks machine are cold. They do not catch fire. The audience can literally run their hands across the sparks with absolutely no harm. Examples of events where the Sparkular China has been used include the 2016 American Music Award and the United States of America, President Donald Trump’s presidential campaigns

Instead of using a pilot or flame to light, the granules of the Sparkular China use the atmosphere to produce the sparks.

The Sparkular China is different from the traditional fireworks machine whose effect could not be stopped once started. With the cold fireworks machine, you can have multiple locations shoot multiple times. Sparkular China has inbuilt safety protocols allowing the user to control the effects. The risk of manipulation of the machine is fully eliminated. The user is able to adjust time, the height of the sparks and volume.

Traditional fireworks machines had a preparation period of days. The Sparkular china is easy to set up. A line of the Showven sparkular can be set up in less than one hour.

Your safety as well as the safety of your audience should be your number one priority.

The traditional machines could overheat up to 1200 degrees. It was impossible to stop them once started. This posed a threat of all forms of hazards and problems including fire.

The Sparkular China does not overheat, it operates at cool temperatures. The sparks produced by this machine are not flammable. Despite its inflammable nature, it is important to maintain a separation distance of about 6-10 feet between the machine and the audience.

Despite the Sparkular China proving to be a great revolutionary achievement, similar versions of Sparkular was produced. CryoFX sells 3 different machines, including Sparkular. The other two are iSparkFX and another sub-par brand. It is said to be the latest improved version of the sparkular.

The iSparkFX is most preferred as the first choice for sparkulars in the market since it is offered at a better price both for sale and rent and has high quality components.

The iSparkFX does not use a card. Instead, it has an on and off button that allows the user to switch it on and off at his own convenience. Contact the CryoFX experts on 1-855-527-9639 for your rental or purchase orders. More information on the product can be looked up at https://development.cryofx.com/ .

The iSparkFX is the latest development of the Sparkular machine. It is therefore in order to advise you to buy Sparkular. Buy iSparkFX.